WSU officials will establish a temporary “restricted traffic zone” on a section of Stadium Way from Grimes Way north to Orchard Dr./Cougar Way during home football games 3 hours pre-game until up to two hours post-game. Vehicular access to this section of Stadium Way will be restricted to emergency vehicles, transit vehicles, stadium support vehicles and vehicles displaying disability permits for the purposes of dropping off persons with disabilities.

The restricted traffic zone is being established for the following reasons: 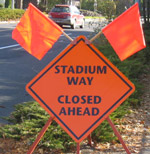 For the most enjoyable experience, plan to arrive early and take advantage of the activities planned for each home game. Follow this link for more information on Game Day Events.

You Can avoid the traffic altogether:

Back to Everything About Gameday Parking